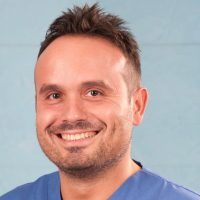 In 2003 he graduated in Dentistry and Dental Prosthetics with full marks. From 2003 to 2005 he attended the Prosthesis department of the University of Tor Vergata directed by Professor Barlattani. In 2008 he attended the IAAD annual meeting at the University of Krems directed by Professor Rudolf Slavicek. In the period 2014-2016 he has been a speaker together with Mr. Enrico Ferrarelli for the national association Antlo. In 2015 he participated at the Brugg’s Gymnasium in the 58th Congress Amici di Brugg. In July 2019 he won the prestigious “Paolo Vigolo” Prosto Contest sponsored by AIOP-EPA-APS. Since 2019 he is a prosthesis and gnathology consultant at the Dental Center of the Agostino Gemelli University Hospital. He is an ordinary member of AIOP, AIC, founding member of SIPRO, active member of SIED and effective member of the Amici di Brugg. He works as a freelancer at his clinic in Rome. He holds various consultations with particular interest in complex rehabilitation in dysfunctional patients.

He is a consultant in complex rehabilitations in dysfunctional patients.

Management of occlusion and vertical dimension from analog to digital

Multidisciplinary Dentistry and Specialist Medicine: What are the connections?